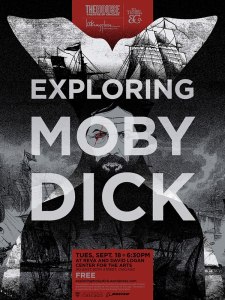 Egad – I know – I owe you a TON of posts from York and Leeds, but right now I want to just say, “Moby Dick.”

I bought a poster last night. I don’t usually do that, but the poster is a keeper – it looks screened to me as the paper is the color of the background, and you can feel the ink on the page – and it is way cool, and it reminds me of the one play excerpt that I saw last night that I really loved.

Three theater companies workshopped three plays – we saw 30+min of each. The only one that I want to see the whole production is the lookingglass adaptation. If they get it on its feet in the next couple years, it will be great. I loved the use of the Remo drums wrapped in rope to look like bollards or winches, and the use of ladders and rigging made it feel like the auditorium was making way. They made particularly nice use if choral recitation and movement to suggest a universality of ideas – loved it.

The puppet version by Blair Thomas & Company (Redmoon puppet maker) was creepy. The puppets were wood and cloth with a little resin (forearms and hands). They were like bones, which of course was visually and thematically interesting but still creepy. They did have the coolest whale – one puppeteer – fiberglass poles to give the tail that whipping action – but mostly it was like a giant open weave basket covered with cheesecloth – sinister and HUGE. I admit, I’m not a huge fan of puppets. The puppets were white/bone/raw wood against black – with grim and whale-ish music by Mike Smith on guitar/vocals and a tuba and percussion. Atmospheric.
The House theater was a bit too meta for me (about a theatre company trying to stage the ultimate adaptation of M-D) with the play as white whale – supposed to be funny yet somehow tedious –

Pizza from Pequod after the production (hilarious). Was the beer Harpoon Ale? The new theater building at U of C is visually lovely, fabulous, and art directed yet oddly cold and uncomfortable all at the same time. A major feat of dissonance, if you ask me.
David Catlin, lookingglass director/adapter and professor at NU, reminded us that we all have chosen to live along the shore of this great inland freshwater sea – and the opening on the book probably speaks to all of us: “Whenever I find myself growing grim about the mouth; whenever it is a damp, drizzly November in my soul; … — then, I account it high time to get to sea as soon as I can. This is my substitute for pistol and ball.”

So, I got a poster – I’m sure you understand.