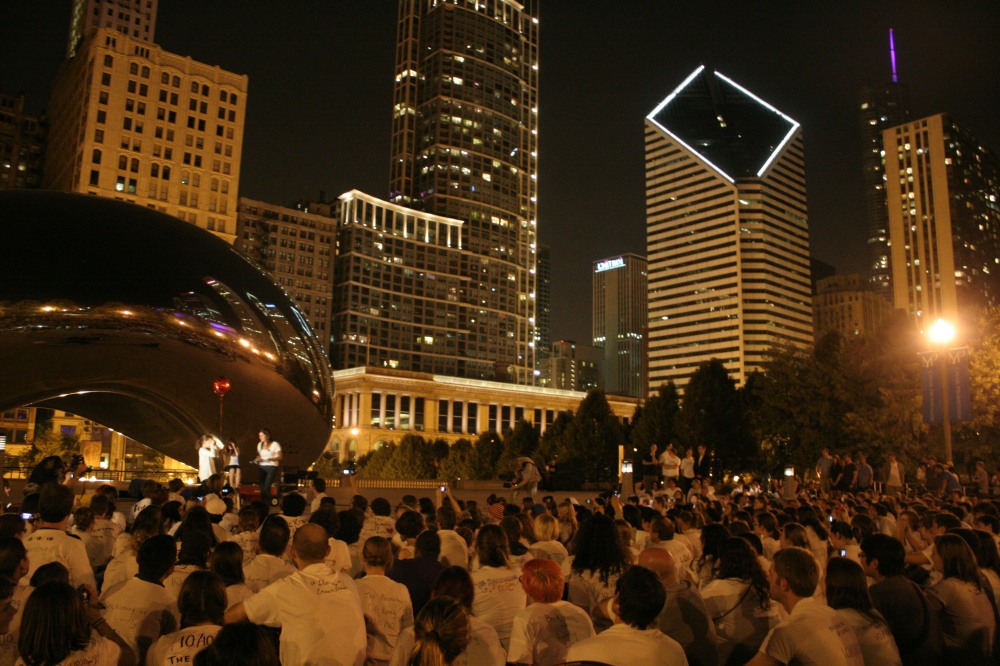 Last night we did something that others may think was silly. We joined a whole bunch of people at the Bean ( public art, Anish Kapoor’s Cloud Gate in Millennium Park) for a moment of something Lovely on 10/10/10 at 10:10 pm.
Organized by Amy Krouse Rosenthal, this was the third moment at the Bean for the Beckoning of Lovely. If you are curious, there are three videos up on YouTube describing the evolution of this (8/8/08 and 9/9/09). If you watch the first one, you will know by about three minutes into the video why it speaks to me and why I went against all of my normal settings (uncertainty, crowds, after 10:00pm) to go and do this.

What do we make in our short time here?
Make someone happy
Make someone’s day
Make cookies
Make a wish
Make something lovely

Last night’s Beckoning featured eleven moments where we could all do something together, hear something, make something. The moments (as I remember them – I have a cold, and this is from memory):

It was made of awesome and lovely.
Cynics among you will say it was silly, just a bunch of hipster kids thinking they are cool – but I disagree. My daughters thought it was magic. They met a favorite author. He gave them orange Starburst and talked to them, called them by name. They weren’t cynical or dismissive of the simple and thoughtful. They cherish their tiny letters. And we were together.
The entire evening was lo-tech with just a microphone to help the presenters be heard. I smiled for an hour.
What do we make in our short time here?
We make connections.
We make meals that feed our bodies and our souls.
We make friends.
We make magic.
We make the most of – “every, every minute.”
(UPDATE!! And here’s the video!)