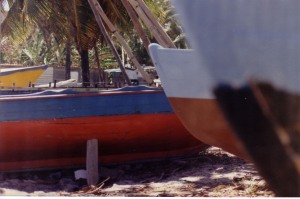 …Knowing how way leads on to way…. (Frost)

A post, led to a comment, led to a post, led to a photo, that led to an abandoned piece of writing. So, I think I will share it here.  More sailing memories.  And to be clear, shortly after this Thanksgiving I fell in LOVE with Antigua: the mountain, the dust, and the chickens and goats in the road, the idiosyncratic shopping, the heat, and the people.  But not the mosquitoes.

Susan was leaving that next day.  I cried.  I wept so hard I was sure that my face would hurt forever.  Red eyes, sobs, I cried even when I was sure I was done.  I cried until I was dry, until the headache of the heat and the emotion overwhelmed me.  I must have cried some more.  The apple green carpet of the aft cabin made my eyes hurt.  Could I roll it up?  There was no private place for my panic about what the next few months would bring or my second guesses about the decision that I had made.  I was going sailing.  I sat in the aft cockpit hoping that someone, particularly the ‘Jim’ someone, would just leave me alone.  My favorite spot on the foredeck  was taken up by Øle, and so I retreated aft; there were no people on the dock to ask what was the matter.  That was the important thing.

The sorts of expectations that I had left me with the empty feeling that you get when you know that you have stepped off into something – well – not right.  I had expected hot.  I had expected it to be tropical.  I did not expect the level of poverty that I saw in a place that had so many resorts.  I was raised in farm country, but here there were chickens and goats in the road.  This place was dry, hot, dusty, a real desert island with no naturally occurring fresh water.  I felt alone; it was Thanksgiving, not a time that I was used to feeling isolated from my family and from (of all things) the cold.  It had taken weeks to get to Antigua, with delays in Fairhaven, and now here I was thinking about a particular meal that is really a memory of meals, thinking about Susan leaving tomorrow, and wondering if I was in love with the man I was with.  I expected turkey. I expected to feel secure and safe.  I expected to go on pretending that there was something normal in what I was about to do.  All I could hear was my grandmother’s voice in my head saying, “Well, you had at least better write.”

It was so hot.  Too hot for turkey even if I could find one; too hot for mashed potatoes, too hot for stuffing and dressing and cranberries, but damn it – the chicken got cooked; the galley was steamy, and every dish was dirty by the time we were done.  Did we make a pie? Susan must have done something sweet.  She was leaving, and she was being wooed by Øle, so she would have shown off her skills as a pastry chef.  I was mad at Øle; Susan was my friend, my family, and the time we should have been together he was occupying.  It became a badge of honor to construct this inappropriate dinner for the ex-pats that were in Antigua.  We had twelve for dinner that day.  I had to ask myself: was I an ex-pat or a traveler?  I knew that I had not left home forever, so I was a merely a traveler.

The day before I had been shopping.  I had taken the bus to St. John’s to the big grocery store.  I had not yet learned the rhythm of the island.  Soon I would know the day the cargo planes and boats landed with produce from other places, the days of the open air market of local produce, the day the eggs were delivered, the best time to shop, the shape of the fishing boats that caught the mahi-mahi and king mackerel.  This first foray into the capital of St. John’s was a learning experience.  I usually shopped at the little market at the top of the road.  It was great for the usual daily needs, but I always felt like I was being a greedy American pig when I wiped them out of a certain food.  For ship’s stores and quantity shopping, I needed to go to St. John’s, and I needed to take the bus.

The bus.  It was the Magic Bus.  Brightly painted, held together with what seemed like bailing wire and glue.  I stood at the top of the road that led to the Catamaran Club staring at the pile of play money coins in my hand: EC.  Light, beautiful coins, with eccentric shapes, but what were they worth?

“Throw them up in the air and whatever lands at your feet is worth something.  Whatever blows away is worthless.”

I turned around.  The voice belonged to the man that I had met on the bus in Bermuda.  I had been shopping then as well, much more nervous that time as I was on my first day of official cook’s duty.

“What are you? My guardian angel?”  He was, really.  He seemed this unexpected calm presence, someone who could read my mind about how worried I was.  I wondered why this guy could figure out that I was scared and nervous and confused, but the people that I was with could not.

He was sunburned.  His auburn hair and mustache seemed redder as well.  His boat, the ‘Annie B’ had cleared customs just the day before.  A few days behind us out of Bermuda, they had been caught in the heavy weather that had followed Hurricane Kate as she turned into the Gulf of Mexico.  No damage, but the seas and sailing hard-to-weather had slowed them down.  His sunburn told me that the ‘Annie B’ had no pilothouse or autopilot to escape the sun on two extra days of the delivery.  I was sure he was more exhausted than he looked.

The bus arrived, already full it seemed, but extra seats appeared in the aisles; the flip-up – flip-down seats didn’t look sturdy enough to hold a child, and one groaned as I sat down.  The trip is a patchwork of images: Reggae music from a tape player, dust, sweat, speeding around corners, a rooster tail of dust behind us, a salmon colored stucco church, scattered buildings at intersections, and then the town.  Capital of Antigua – St. John’s.

When we arrived in St. John, my guardian angel directed me to the largest grocery store.  Its false front made the building look two stories tall, but it was a dark, deep, low ceilinged dusty space, full of open wooden shelves.  The shelves here were full, but with a lot of unfamiliar products and languages.  The owners purchased goods from many countries, and there were canned goods and boxes of dry goods recognizable only barely by the photo on the cover.  There was lots of Farsi — lots and lots of Farsi – on cans, boxes, bags, and bins.  I bought dried beans, lentils, and milk; RO water (reverse osmosis – the only fresh water generally available) except for expensive imported water; Danish cheese; bread; large boxes of shelf stable juice, milk, and tomato sauce.  I bought a cart full, as much as I could carry in the canvas bags and back-pack that I had brought with me.  I spent enormous quantities of EC – at $2.60 EC to the dollar I was still startled when I saw how many of the colorful bills I needed to produce.  Everything was a cash economy for the boat.  Money wired from here to there, no credit cards, no checks- just cash.

I walked out of the store loaded down with my canvas bags.  Now what should I do?  I was no longer panicked about shopping, but I was starving.  I had no idea where to find something to eat except the food that I had in my bag.  I knew that I could break some of it open, but I wanted to sit and take stock, not picnic on a stoop somewhere.

I stood in my long braid and baggy shorts, looking down the street.  I was near a small cluster of trees and a white wooden church.  The smell of the streets was awful: sewage and rotting garbage.  I was seriously rethinking food.  The heat was intense and the flies were everywhere.  The look on my face must not have read “tourist.” There was no cruise ship in the harbor, but I had no confidence.  Clearly.  A local woman approached me and asked if I was with the Peace Corp.  Okay, now it was clear.  Not arrogant enough to be a tourist, not together enough to be charter crew, uncertain enough to be a well meaning, pale white woman – clearly a Peace Corp volunteer?  I could teach these people nothing.  As I stood there I knew I had nothing to share with them, no language, no tools, no skills they did not have.  I felt like I would either laugh or throw up.  Maybe both.

Photo is mine.  Wooden whaling boats on the beach on Bequia.