We’ve been looking at American poets in class this week and I always like these days.  Each student brings in a poet and we look at their life and an amuse-bouche of their work.  This week we had Robert Creeley (and his poem Zero), Paul Laurence Dunbar (and his Caged Bird and some of his dialect poems) and Countee Cullen (no look complete without Incident).  It’s been lovely in Chicago this week, so I felt the need to read to the class Late Spring by Robert Hass, from his collection Human Wishes.  Go buy this book.  It’s amazing.

And then in mid-May the first morning of steady heat,

the morning, Lief says, when you wake up, put on shorts, and that’s it for the day,

when you pour coffee and walk outside, blinking in the sun.

Strawberries have appeared in the markets, and peaches will soon;

squid is so cheap in the fishstores you begin to consult Japanese and Italian cookbooks for the various and ingenious ways of preparing ika and calamari;

and because the light will enlarge your days, your dreams at night will be as strange as the jars of octopus you saw once in a fisherman’s boat under the summer moon;

after swimming, white wine; and the sharing of stories before dinner is prolonged because the relations of the children in the neighborhood acquire village intensity and the stories take longer telling;

and there are the nights when the fog rolls in that nobody likes –hey, fog — the Miwok sang, who lived here first, you better go home, pelican is beating your wife–

and after dark in the first cool hour, your children sleep so heavily in their beds exhausted from play, it is a pleasure to watch them,

Leif does not move a muscle as he lies there; no, wait; it is Luke who lies there in his eight year-old-body,

Lief is taller than you are and he isn’t home; when he is, his feet will extend past the end of the mattress, and Kristen is at the corner in the dark, talking to the neighborhood boys;

things change; there is not need for this dream-compelled narration; the rhythm will keep me awake, changing. 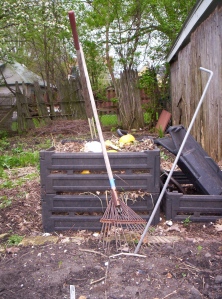 The photos are of my garden – the peas, the garlic (and bindweed), the two kinds of apple trees, the compost pile and beyond it the area that we will add two new beds into.  And Hannah’s foot is in the pictures somewhere, too.  Something else that we are growing.