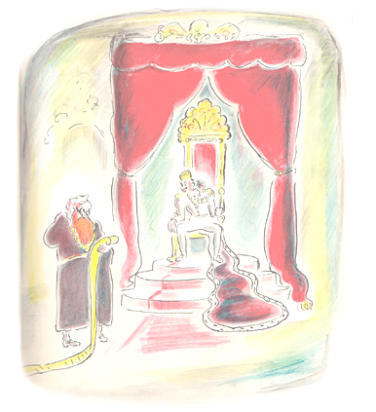 When the girls were little, I never missed an opportunity to read James Thurber’s Many Moons to them.  It is the story of the Princess Lenore who “fell ill of a surfeit of raspberry tarts” (something we wish we could all relate to in the dead of winter) and takes to her bed.

The king, her father, is very worried, and he calls his most trusted advisers one by one for advice on how to help the princess, for she has said that the only way she will get better is if someone gets her the moon.

I love this book.  I love the amazing illustrations by Louis Slobodkin (it won the Caldecott Medal in 1944), but it’s really the storytelling that I love most.  Yes, Lenore is spoiled (she’s a princess, but don’t we all want to get the moon for our daughters?), but she also is not unreasonable. The advisers to the king are hilarious, and they are sure that they can not get the moon for Lenore.

They each give the king a list of amazing things that they have divined or acquired for his majesty – they include:

ivory, apes, and peacocks, rubies, opals, and emeralds, black orchids, pink elephants, and blue poodles, gold bugs, scarabs, and flies in amber, hummingbirds’ tongues, angels’ feathers, and unicorns’ horns, giants, midgets, and  mermaids, frankincense, ambergris, and myrrh, troubadors, minstrels, and dancing women …. blood out of turnips for you, and turnips out of blood… rabbits out of silk hats, and silk hats out of rabbits…  divining rods, magic wands, and crystal  spheres in which to behold the future… seven league boots,  the golden touch, and a cloak of invisibility, horns from elfland,  sand from the sandman, and gold from the rainbow.

the distance between the horns of a dilemma, night and day, and A and Z… how far is up, how long it takes to get to away, and what becomes of gone… the length of the sea serpent, the price of the priceless, and the  square of the hippopotamus… where you are when you are at sixes and sevens, how much is you have to have to make an are, and how many birds you can catch with the salt  in the ocean- 187,796,132, if it would interest you to know.

Each adviser has his own idea of what the moon is made of, how far away it is, and why it is impossible to get for the king and his princess.

No one but the court jester has the wisdom to understand the problem, and it is a wonderful tale of common sense and empathy.

Lenore is fortunate to have a father who loves her, and he is fortunate to know that sometimes you just have to ask and listen.  It is a story about perspective and imagination, and it uses language in a way that makes it magical to read over and over again.

Many Moons by James Thurber – Illustrated by Louis Slobodkin