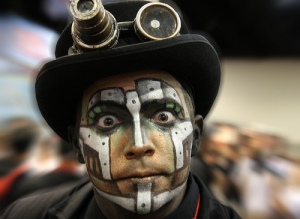 I know that I have unrealistic expectations for professional development, and maybe that is because I feel like I spend a lot of time with colleagues (both face to face and virtually) who are always thinking and challenging their own expectations and skill set.  The people that I look to for PD daily are the folks at blogs I visit regularly (you can find them on my blog roll) and who are next door, down the hall, or across the courtyard. I have the real  pleasure of working with a lab “coordinator” who is a co-teacher in the very best sense and a learning resources teacher who is one of the most gifted and caring teachers that I have ever met.  They make me look good.

So it is always with great hope and certain trepidation that I head out to teacher seminars. I have been generally pleased with those organized by the Newberry Library (just up the street and a convenient bus ride from school). A memorable morning was spent looking at the allegory in Dante’s Divine Comedy and Joss Whedon’s Buffy the Vampire Slayer.  An interesting conversation looked at Steinbeck’s The Grapes of Wrath and other contemporary “road” narrative (although they missed Lonesome Dove by Larry McMurty – a classic Exodus tale).  But the last seminar I attended last year looked at *gasp* the fact that Walt Whitman wrote about sex in his poetry. News flash? Not really.

I had great expectations for last week’s seminar billed as: Steampunk to Slipstream: Contemporary Trends in Fantasy and Science Fiction

Although science fiction has been a popular genre for decades, and fantasy derives from a tradition as old as literature, the past two decades have seen a dramatic blurring of the boundaries between genres, between genre and literary fiction, even between adult and young adult fiction. This seminar will touch upon several authors representative of these trends, both in England and the U.S., such as Kelly Link, China Mi‚ville, Neil Gaiman, Scott Westerfeld, Jeffrey Ford, Neal Stephenson, Cory Doctorow, and others. Gaiman’s The Graveyard Book, which received the 2009 Newbery Award and is also a finalist for the World Science Fiction Convention’s Hugo Award, [description published before it won – btw] will serve as an emblematic text of this new multivalent, multi-audience approach to fantastic literature.

I guess “multivalent” should have tipped me  off.

I am a HUGE fan of this genre, and I taught a class last year in Science Fiction and Fantasy in Literature and Film.  There is a small smattering of posts from that class (like this one on My Super Self) here on the blog, and as a class it was wholly satisfying to teach. I want to include a science fiction or fantasy book in the seventh grade curriculum, and I’ve been entertaining notions of either Little Brother by Cory Doctorow or The Graveyard Book by Gaiman.

Instead of spending three hours talking about new trends in Science Fiction we were treated to an hour and a half lecture on the history of the genre beginning with From Earth to the Moon by Jules Verne (complete with French name pronunciation).  He talked smack about Amazing Stories and Weird Tales and other pulp fiction. He talked smack about the first WorldCon in 1939 (“All these genres have their own conventions”); the readers and writers to the editors of magazines (“some farm wife, living out in the middle of Nowhere, Kansas reading these stories with no one to talk to”); and the genre in the United States (“in England, Science Fiction is a part of the literary landscape, but it is marginalized in the US”). And he of course started by asking us if we were fans of the genre and did we give it up when we turned 15.  Ewww.

When he did finally get around to discussing The Graveyard Book he asked, “Where would it fit in the literary genres?” Was it a ghost story? A murder mystery with a serial killer? A coming of age story? (“Ah, curse your sudden but inevitable betrayal!- that’s what went through my mind at that moment – had to share).  He said that he thought it was a series of short stories that all linked; things were set out at the beginning that were knitted in at the end and things left unexplained. “This is set up for a sequel.” Here are my notes:

War between the guardians and the Jacks of All Trades?  What happens/ed in sequel.  If there is a sequel it will be like the LOTR and the Hobbit. The book is a reversal of genre conventions and expectations like the Topper novels and A Fine and Private Place. What about the Guardians? Is Silas a vampire? Night Dogs – what are they? Werewolves? The Ghouls are immature goofy adolescents.  What looks like and functions like a horror novel trope is like low comedy when we are in the midst of it. Draws in the novel what he needs? Trying to write in the classic mode of literary fairy tales.

He tried to explain Steampunk (not very well) and he predicted that Scott Westerfeld will not be able to sustain a readership for Leviathan because he is really just jumping on the Steampunk bandwagon. He talked about Westerfeld’s other books briefly.  He said the Little Brother by Cory Doctorow was already dated and irrelevant, but that curiously teaching it might get me in trouble as it can be seen as a handbook for circumventing security systems.  I asked if the surrendering of our freedoms for the sake of convenience wasn’t an important theme to teach.  He saw some merit in that.  We spent most of the actually interesting conversation looking at Ted Chiang’s “Exhalation” a fascinating story that is a meditation on self discovery. There was a mildly heated discussion about whether or not it was essential to understand and recognize the second law of thermodynamics to really understand the story (so the moderator believes). Entropy my ass. I didn’t need to recognize it to be moved by the consciousness trying to understand itself in the story.

So where does this lead me? Back to the teachers that I communicate with over their blogs and Twitter and face to face.  It seems to me that seminars are for those whose school and professional life lacks the riches that I am fortunate to have. Thank you to each and everyone of you for making my everyday interactions about teaching, books, stories, writing, and cognition fresh and lively.

I am lucky to be able to co-present a workshop this winter at the Illinois Computing Educators Conference. I will remember all the sins of ballrooms and seminar rooms past and beg the gods of presentation to not let me repeat them.